NatashaT Posts: 1,337 Teacher
September 2015 in Animals and Pets
Have you read Aesop´s fable about the tortoise and the hare? If not, you can read the story here: http://www.learn-english-network.org/stories/fables/tortoiseandhare.htm

We read and discussed an article talking about whether it would really be possible for a tortoise to win a race against a hare. 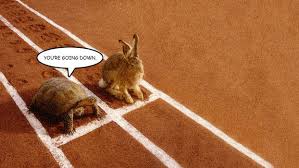 outlive - survive or live longer than something else

wander - walk or move in a casual or aimless way

metaphor - a figure of speech where one thing is used to represent another without using like or as (e.g. He is a pig when he eats. = He eats in a similar way to a pig.)

proverb - a short saying in everyday use, stating a general truth or piece of advice (e.g. Actions speak louder than words.)

idiom - a group of words that have a meaning that is not related to the meaning of the individual words (e.g. caught red handed)

in the know - to have knowledge about something; the experts about a subject

sprints - a race at full speed over a short distance

couple with - combine with, join two things together

veer - change direction suddenly, usually to avoid something else


There are many other strange animal races - you can see some in this video (thanks @zakaria_dandouni1 !)

What is the strangest animal race you have ever seen?
Tagged:
2