There I was on a July morning,
I was looking for love.
With the strength
Of a new day dawning
And the beautiful sun.
And at the sound
Of the first bird singing
I was leaving for home.
With the storm
And the night behind me
Yeah, and a road of my own.

mheredge Posts: 44,369 ✭✭✭✭
May 2019 in Technology and Games
As cameras appear at unlikely spots across the globe, activists raise fears about lost privacy and say society might be on the doorstep of a dystopia where Big Brother sees all. THIS ARTICLE tells of face-recognition technology that can check passengers in on flights, without need for passports.

In London alone, there is estimated over half a million securities cameras (for a population of 10-12 million). There are over 4 million cameras in the country, representing about one for every 14 people. It is thought that an average Londoner can be caught on camera typically 300 times in a day. Though the UK has only about 1% of the world's population, the EVENING STANDARD reports that it has 20% of the world's CCTV cameras.

China is reckoned to have the most cameras, with 170 million used to watch its 1.4 billion population. Beijing and London are reckoned to be the most watched cities. (https://vintechnology.com/2011/05/04/top-5-cities-with-the-largest-surveillance-camera-networks/)

France has been relatively slow in installing cameras. However, according to a very recent report (5 May 2019), Nice tops the list with 2,145 cameras on public roads (plus 170 in tramway trains) for a population of 344,000. The country's other major cities — including Paris, Lyon, and Marseille — have their share of cameras too. But France doesn't allow the use of facial recognition technology, which is now commonplace in China and is also making inroads in Great Britain and the United States.


Do you feel that Big Brother is watching you? How far do you feel safer by having cameras watching your every move? Do you think that they infringe your privacy? What is it like in your country? 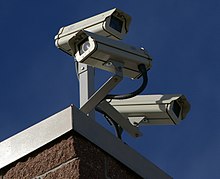